Known internationally as the guitarist of the progressive rock band Genesis from 1971 – 1977, Steve Hackett quickly developed into his own with a successful solo career which has expanded for over forty years. He was and still is considered one of the most influential guitarists in the industry, for his guitar riffs are immensely distinctive. In his album To Watch The Storms (2003), there is a specific moment in The Devil Is A Englishman, where the strings are crafted to mimic a voice, a soft male groan that heightens to the true nature of the sound.

Now, in 2013, he stands in the Royal Albert Hall to promote his second leg of Genesis Revisited II tour, a collaborative album released last year and the sequel to Watcher of the Skies: Genesis Revisited (1996). Following his support, solo artist Alan Reed – former vocalist of progressive rock band Pallas – he was joined by the likes of guitarist Roine Stolt (The Flower Kings, Transatlantic and Agents of Mercy), vocalist Ray Wilson, former member of post-grunge band Stiltkin, previously appearing on Genesis’ Calling All Stations (1997), vocalist and bassist John Wetton (The Flower Kings, Asia and Ayreon), vocalist Nad Sylvan (Agents of Mercy), and vocalist and guitarist Amanda Lehmann. It was potentially going to create an atmospheric and wistful tribute to Genesis’ early years, covering the career changing songs lead by Peter Gabriel (1970 – 1974) and the eventual takeover with drummer and collaborative vocalist, Phil Collins (A Trick of the Tail, Wind and Wuthering (1976)).

When I walked into the auditorium, not only was it full, but just above my head were strange, roundish perhaps cylinder shapes upon the ceiling. Attached to them were small beams of lights, and in the upper circle of the gallery I saw distant shapes of people; wandering around trying to find their seats.

It was at High Voltage Festival located in Victoria Park, London (25th July 2010) that I and some accompanying family members saw Steve Hackett and his entourage play live. It was to promote his newest album that year, Out Of The Tunnel’s Mouth (2009). We were initially there to see Emerson, Lake and Palmer’s last tour together as a group, not expecting Hackett to be there for another day on that weekend – so seeing him as well was a treat.

The performance that year was spectacular, and that alone made us forget that we were standing in the middle of the field under the strong heat of the sun above us. So last night, with that memory reflecting in my mind, I felt butterflies in my stomach upon how Revisited would turn out.

The concert was a total of two and a half hours, songs featured were Return of the Giant Hogweed, The Musical Box and The Fountain of Salmacis (Nursery Cryme , 1971), Horizons, Supper’s Ready and Watcher of the Skies (Foxtrot, 1972), I Know What I Like (In Your Wardrobe), Dancing With The Moonlit Knight, and Firth of Fifth (Selling England By The Pound, 1973), The Carpet Crawlers (Lamb Lies Down On Broadway, 1974), Ripples (A Trick of The Tail, 1976), Afterglow and One For The Vine (Wind and Wuthering, 1976).

Being a loyal follower of Hackett’s career for almost as long as Gabriel’s, it was not uncommon of me to keep a close eye on the playlist and featuring guests for each gig. Looking back on the set of Colston Hall, Bristol on 23rd October, or O2 Apollo, Manchester, which he is to play tonight – 25th October – it’s clear that Steve likes to pluck out different people and songs from the Revisited II album, whether if it may be from availability or to receive different dynamics for the show.

For example, Nik Kershaw appeared at Hammersmith Apollo (May 10th 2013) singing The Lamia (Lamb Lies Down On Broadway, 1974). Last night, Roine Stolt was to guest for he was already in London for the Peter Gabriel’s So, Back to Front show at the O2, 21st October.

Roine Stolt had not performed with Steve Hackett since 24th July 2010 at High Voltage Festival, the day before I and family members attended. They along with Neal Morse (Spock’s Beard, Transatlantic), Pete Trewavas (Marillion) and former drummer of Dream Theatre Mike Portnoy played various tracks over Genesis’ progressive rock discography such as The Return of The Giant Hogweed, a track he happily contributed to this time around.

There was continuity with two particular guest appearances of Revisited II though, and this was Nad Slyvan and John Wetton, the latter appearing once before for the first leg of the tour at Hammersmith Apollo with Nik Kershaw to play Firth of Fifth.

Originally featured on the album, guest vocalist for Dancing With The Moonlit Knight, Entangled, Dance On The Volcano and Return Of The Giant Hogweed, Slyvan is an individual with an ear for imitation, doing his absolute best to regulate the style and vocal range of Gabriel when he was in his prime, yet at times was unable to always reach the incredible, adaptive octaves he possessed.

The ever changing vocals of Sylvan were, however, as you could put it brought down to earth with the subtly of Ray Wilson, who possesses a nurtured gruffness in the duet Entangled, I Know What I Like (In Your Wardrobe), and Carpet Crawlers. Intermixed were the sublime, yet playfully skilled acoustics of Hackett.

There is a soulful subtly, or smoothness to Wilson’s voice and it brings an interesting twist to the prog classics.

The harmonic joining of Hackett, Stolt and Wetton onto the musical journey of Firth of Fifth absolutely astounded me. Hearing them amoungst the cheering, singing, dancing crowd really increase my knowledge to their incredible talent with the guitar strings, treating their instrument like a piece of art; one moment being gentle with the brush, but every now and again would spray the paint in their own delight. Such antics excited the crowd so much that they almost completely controlled the duration of Supper’s Ready, they as if by instinct shouting out “All change!” when the story morphed from a metamorphosis of a flower to the mundane everyday life of society. I couldn’t help but feel drawn into the fray.

Last, but not least, there was Amanda Lehmann. The only female vocalist guested upon Revisited II.

It appeared to be a small tribute to progressive rock’s sub-genre symphonic rock and metal. This particular genre is a haven for established female vocalists such as Sharon den Adel (Within Temptation), another associate of Ayreon, featuring on his album Into the Electric Castle (1996), Tarja Turunen, Sami Vanska and Anette Olzon, all former vocalists of Nightwish.

She gave her lulling, folk-originated singing to the softer numbers Ripples, and Entangled (featuring Nad Sylvan and Ray Wilson), but not only was a gifted vocalist, she joined the row of guitarists. She gave a perfect echo to the stronger male vocalists, like they were standing in an empty room and she was the shadow that voiced back.

The only negative aspects of the show I found, and to no fault of Hackett himself, was the sound quality within the Royal Albert Hall, and the various times where the moving, alternating light show distorted my vision, making it hard to see at times. This was more likely a result of where I had been sitting, and the expansion of the auditorium, as I found sometimes the sound went upward.

Overall, it was a wonderful performance and Steve Hackett along gave it his best like so many times in the past. It completed my experience upon seeing the likes of Ray Wilson, Roine Stolt and John Wetton in person alongside him on stage, as these figures have been known to me for as long as I can remember. I have grown up hearing about The Flower Kings, Asia, Transatlantic and the album Calling All Stations just as much as Genesis, Steve Hackett and Peter Gabriel. To see this group play together again, after witnessing a wonderful, friendly rapport, will be worth seeing in the near future. 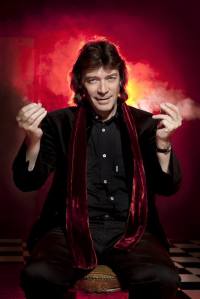